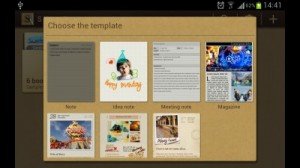 S Pen is something unique in our Galaxy Note. ICS (aka Android 4.0) update simply made our Note more useful with some new apps specially for S Pen. S Note is one of these new and interesting apps.

However, some Galaxy Note users are not sure how to use S Note, although, Samsung already includes the 6-page S Note tips, 6-page productivity tips, and 6 samples (not sure why Samsung guys like 6, 6=s) in the S Note app.

So, I created this tutorial to give you some idea how to use the productivity tools in S Note.

For Galaxy Note 3 and Galaxy Note 10.1 2014 Edition, this productivity tools is integrated into S Note app. So in the new S Note app, you can not find this tools directly. Please read this post for more info.

In the 8min 30s video (screen cast with audio), the following topics are covered:

Tools used to create this video include:

More tutorials  for S Note app can be found here in  the S Note guide page.

After ICS update, some Galaxy Note users complained about poorer battery life compared with that with Gingerbread. Initially, I thought it is a problem of “feeling” because I personally felt similar battery life after the ICS update. I was a bit disappointed because I had expected some sort of battery life improvements.

Suddenly, last week, I encountered the battery drain issue: battery just draining crazily. In one hour it can drain 3-10% battery capacity when the phone is idle. So, I know the users complaining are not alone.

First, I installed an free app called CPU Spy (https://play.google.com/store/apps/details?id=com.bvalosek.cpuspy), which will give you the duration of  each CPU state. When your phone is idle (screen off, no music playing, no downloading), normally, your CPU should be in “Deep Sleep” state. For example, after one night, you check your CPU Spy, it should look like this.

As you can see, this is the normal situation. In the night, 95%of the time, the CPU is in deep sleep, and after 11 hours, about 6% battery was drained (I also checked emails before sleep).  If your phone does not go to deep sleep, you will find the duration on other state is higher. Very likely, you have battery drain issues if more than 20% battery are drained when you are sleeping (6-10 hours),  You probably will find far larger percentage on 200MHz state. If more than 30% are drained in one night, very likely, your phone never goes to Deep Sleep state.

So, install the CPU Spy (free), use your Galaxy note as usual for a few hours,  fully charge your phone, disconnect … 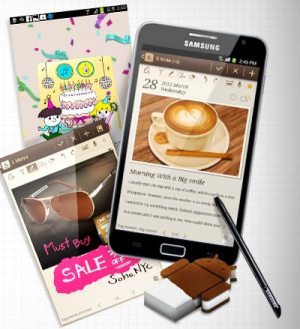 In February, we reported that Galaxy Note probably would get the Ice Cream Sandwich (ICS, aka, Android 4.0) update in March (together with Galaxy SII).

Obviously, Samsung missed the target. Galaxy SII users in Europe and some other regions started to receive ICS update about two weeks ago. Nothing for Galaxy Note users.

Last week, Samsung officially pushed the date to Q2. So, your waiting time should vary from one week to one week plus 3 months. Usually, when a phone manufacturer tells in Q2, it usually means June; it seldom means April.

The good news is that Samsung will bundle the S-Pen “Premium Suite” Apps together with your delicious ICS. You may watch the preview video of this  “Premium Suite” on Youtube. It is not so bad, anyway.


Update:  you can also use these 3 methods to take screenshot on your Samsung Galaxy note 3 and Galaxy Note 10.1 2014 edition. The methods works on all Galaxy Note family products.

Update 2: for Galaxy Note 4, the S pen method does not work. Please check this guide on how to take a screenshot on Galaxy Note 4.

Update 4: If you want to use the scroll capture feature (one screenshot covering multiple screens) in Galaxy Note 5, please follow this scroll capture guide.

With Galaxy Note, you have three different ways to take screenshot.

Holding the S pen button, then tap and hold to the screen. This is unique to Galaxy note. Other two methods apply to Galaxy S II and a few other Galaxy models. But this method need S pen, so it is exclusive to Galaxy Note. The best thing about this method is that  after the screenshot is captured, you are prompt to edit this screenshot (as you are holding S Pen now). Quite smart design!

Tapping and holding Home key and the Power/Lock key simultaneously. In the practical operation, you can  press and hold the Home key first, then quickly press the Power key.  This method  is mentioned in the Galaxy SII’s manual, but not in Galaxy Note’s manual. But anyway, it works. Actually it works on most Samsung Android phones.

This method does not work on …