In CES 2014, Samsung finally unveiled the largest tablet they ever made: the 12.2″ Galaxy Note Pro.

In this post, I will share with you our comments (not reviews yet) of Galaxy Note Pro.

The official specs of Galaxy Note Pro are really impressive. But this is not surprising, because Samsung always put the best hardware (except camera) on Galaxy Note series.

Just for your information, here are the official specs of Galaxy Note Pro.

Hardware specs surely put Galaxy Note Pro in the top tier of tablets. But tablet is not just hardware: it is about user experiences.

When the 12.2″ tablet was rumored last year, the first reaction of most people was “it is nice but it is simply too big”.

This was actually the identical response of the introduction of Galaxy Note in 2011. In 2012, I wrote a short post to address this concern: Is Galaxy Note really too large? The answer is always: size always … 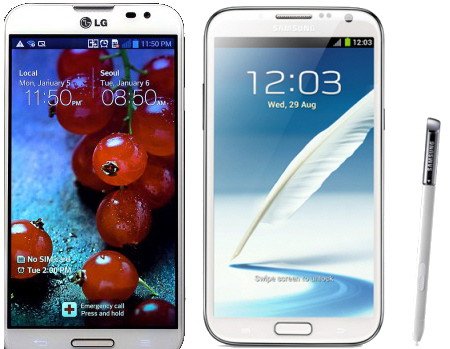 It is not a secret that LG wants to step into the phablet market which is dominated by Samsung’s 5.3″ Galaxy Note and 5.5″ Galaxy Note 2. The 5″ rectangle slab, Optimus Vu, and Vu 2, announced last year, failed miserably to get into this niche market.

So, this year, LG Optimus G Pro was announced during Mobile World Congress 2013. It will be released in selected regions next month. This time LG gambles on the Optimus G branding. Will it be successful?

The eye-catching feature of this phone is its 5.5″ full HD IPS display. So, the targeted competitor of Optimus G Pro is not Galaxy S3 or recently announced Galaxy S4. LG actually wants this phone to be the alternative of Galaxy Note 2.

From the timing of the announcement, it can be easily deduced that  Galaxy Note 2 is the target. By releasing a handset in the middle of Galaxy Note 2 and the coming Note 3, Optimus G Pro can get about 6-month lead in hardware specifications against Note 2.

LG recently started to know how to design a great Android phone after they worked with Google for the Nexus 4. LG then transformed Nexus 4 into Optimus G, which is the most successful Android phone LG ever made.

For the back, LG also abandoned  the all-glass design spotted  in Optimus G. Plastic was chosen for Optimus G Pro. The build quality is similar to Note 2.

One thing that some people may like in Optimus G Pro is the Q Button. This is a dedicated button in the left side.  You can configure any  (but only one) app for this button. Of course, you can configure it as a camera button, just like many …