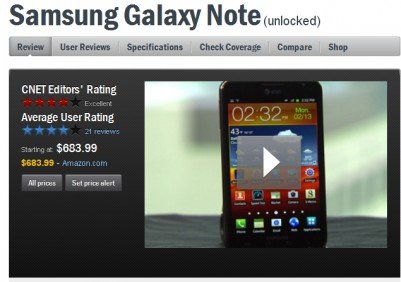 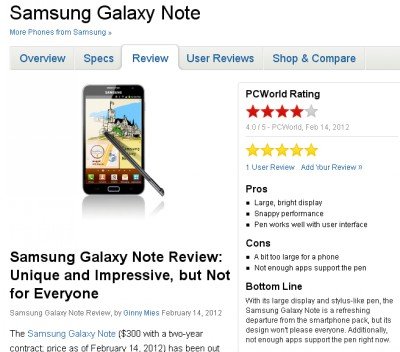 Bottom Line
With its large display and stylus-like pen, the Samsung Galaxy Note is a refreshing departure from the smartphone pack, but its design won’t please everyone. Additionally, not enough apps support the pen right now.

3. Review from engadget by Tim Stevens

Personally, I like to read reviews and articles form Engadget. This review is trying to compare the performance of AT&T version with international version (they published a review for it by Zach) . Some performance degradation was spotted. Overall, the review is quite positive.

The Note is big, but not unmanageably so. Those with small hands might find it a bit unwieldy at times, but even if your glover has you written down as XS you shouldn’t rule this out completely. After a few hours with the Note you’ll very quickly become accustomed to the size, and once you have you won’t want to go back.

With the decrease in performance and battery life here, the international release is still the better phone overall, and we can’t help but be disappointed by that. Still, given the relative affordability of the US release of the Note ($300 on-contract) and its ease of availability, we certainly wouldn’t blame you for heading to AT&T and ordering yourself an American Superphone. It’s one of the best phones of any size on the market today, regardless of what market you’re in.

The review is interesting as it was written from a different angle. It tried to focused on whether the size affects functions and performance, in addition to standard review on hardware, performance, UI and apps. The reviewer’s main concern is the Gingerbread  (Android 2.3.6) is not suitable for this big phone. So, it is good as a phone, and it is not good enough as a tablet.

Overall, as a smartphone, the Samsung Galaxy Note still gets high marks in almost every area and make no mistake, anyone would be lucky to carry one in their pocket. But even though I’ll always look back on the Galaxy Note with much admiration, I’ll always remember how much more the Galaxy Note could have been if it was simply true to itself — a pocketable tablet.

Is this a phone for you? Sure! The added size makes it hardly portable, but the large 5.3″ HD screen makes movies and pictures a joy to consume and browsing the web rocks. I could see the Note replacing my tablet but I’m still unsure as to if I’d replace my Galaxy Nexus with it. They are both awesome but at times while in public I did get a few odd looks with it up to my ear.

In the end is this a phone that you could use? Absolutely. Some with smaller hands might find the phone unwieldy at times, but for the most part I’ve managed to get over the sheer size of the phone and enjoy it for what it truly is. And that is an impressive multimedia, consumption, and creation device. At first I was thinking this was more of a Niche device but in reality I could see it becoming much more than that. Add in the huge coverage from Super Bowl and I’m sure many are extremely interested in this smartphone — and with good reason. The Galaxy Note is extremely impressive in every aspect and once it has Android 4.0 Ice Cream Sandwich it will be pretty hard to beat.

We seldom read phone  reviews from news papers. But this one is special: the reviewer gives totally negative review of Galaxy Note. Maybe we do not agree with his arguments, but we appreciate such straightforward words. The arguments include: 1) too large; 2).too large; 3).Gingerbread, not Ice Cream Sandwich; 4). S Pen does not work well with the device.

Because of the Note’s size, some have called it a “tablone” and a “phoblet.” No matter what you call the Note, it’s a gadget I’m happy to live without.

What’s your opinion on these reviews? Leave your comments below!